Let’s face it. The more you hike in the great outdoors, the more likely you are to have an encounter with a bear. Knowing what to do is a crucially important survival skill. Most of the time an encounter with a bear will be brief and harmless if you know what to do, but too often I’ve heard people made bad decisions that have resulted in tragedy. I’ll share with you some of my own experiences and a few unfortunate stories so we can learn together how to handle these situations safely.

The fact that bears live out there in the wild should not at all detour you from your plans of getting out and enjoying nature. All you need to do is be prepared. The first time I visited Yosemite National Park in California, I was well aware of the signs all over the park NOT to feed the bears. Bears frequently roam into the campground areas especially at night when the smell of cooked food attracts them. They are usually pretty shy of people and large groups so they will wait till everyone is asleep to roam around the campgrounds looking for food that has not been properly stored away. Each campsite in Yosemite has a metal bear-proof storage container where you put ALL of your food, toothpaste, shampoo, or anything else with a sweet smell. Unfortunately some people learned the hard way by leaving food in their parked cars. Just take a look at this page of images of pesky bears breaking into cars.

Rule #1: Don’t leave food out. Store it in the bear-proof containers provided at the campsite.
Rule #2: Never feed a bear (that includes the cute little cubs)!

If a bear does enter a campground area, it is customary for campers to alert the bear and other campers by loudly banging two pots together. This will usually ward the bear off. Once while I was camping in Yosemite, I heard the sound of pots and pans banging together in the middle of the night which probably meant there was a bear around. That didn’t help me sleep much, but it’s better to be aware if there’s one around than to be in the dark about it. 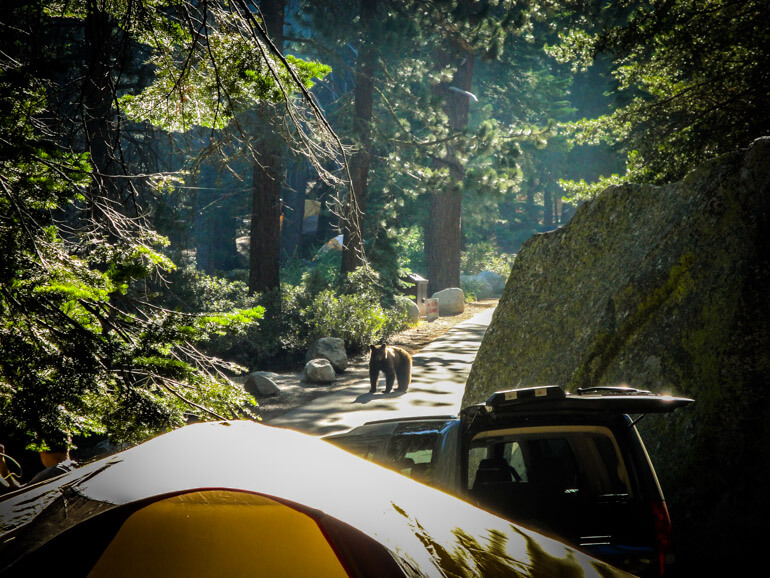 Rule #3: If you see a bear at night, talk loudly or bang on some pots and pans to ward it off and alert other campers of it’s presence.

Once my brother was out hiking in the Sequoia National Park area. He came across a couple of Russian tourists that had been out fishing. They spotted two baby bear cubs and thought it would be cute to play with them. They began to take out the fish and lure the cubs over to them so they can pet them. My brother took out his video camera thinking that he was about to witness the death of these two fools. Fortunately he was wrong. But this is a perfect example of what not to do. If the mother of those two cubs had seen those guys, that could have been it for them. Which brings us to the next rule.

Rule #4: Do not play with baby bear cubs. The protective mother is usually not far away.

Seeing a bear in the wild could be an inspiring almost spiritual experience. After all, it is a grand creature that still roams freely. The type you would find in Yosemite are American black bears. But don’t let the name fool you. Black bears can be black, blue-black, dark brown, brown, cinnamon and even white. This explains why when visiting Sequoia National Park, we saw a large cinnamon colored bear climbing down a hillside towards some metal dumpsters. At first I was like, “That couldn’t possibly be a grizzly right?” Well no, it wasn’t. But had I been in Glacier National Park it might very well have been. You can’t always tell the difference between a grizzly and a black bear. One way to do it is to look for a pronounced hump on the back shoulder of the bear. If there is one, then it’s a grizzly. Grizzlies tend to be larger, but size can’t always be used to differentiate between them. Safest thing to do is to learn about the wildlife present in the area you will be hiking or camping in.

Rule #5: When hiking, learn about the local wildlife you may encounter.

There are a few things you can do to be prepared for a hike in bear country. First, bring a whistle. This has the same purpose as the pots and pans trick while camping. Also, some people carry a camping knife with them. It serves multiple purposes…to cut rope, fishing line, or in a dire situation can act as your only weapon. Sporting good stores also sell bear spray. Bear sprays have been tested and seem to work causing the eyes and nose of the bear to burn from the pressurized hot peppers in the spray. The only problem is you have to be pretty close to the bear to use it effectively…like 18 to 30 feet. That is damn close which is why this is only a last resort solution.

Rule #6: Carry a safety whistle when you hike. 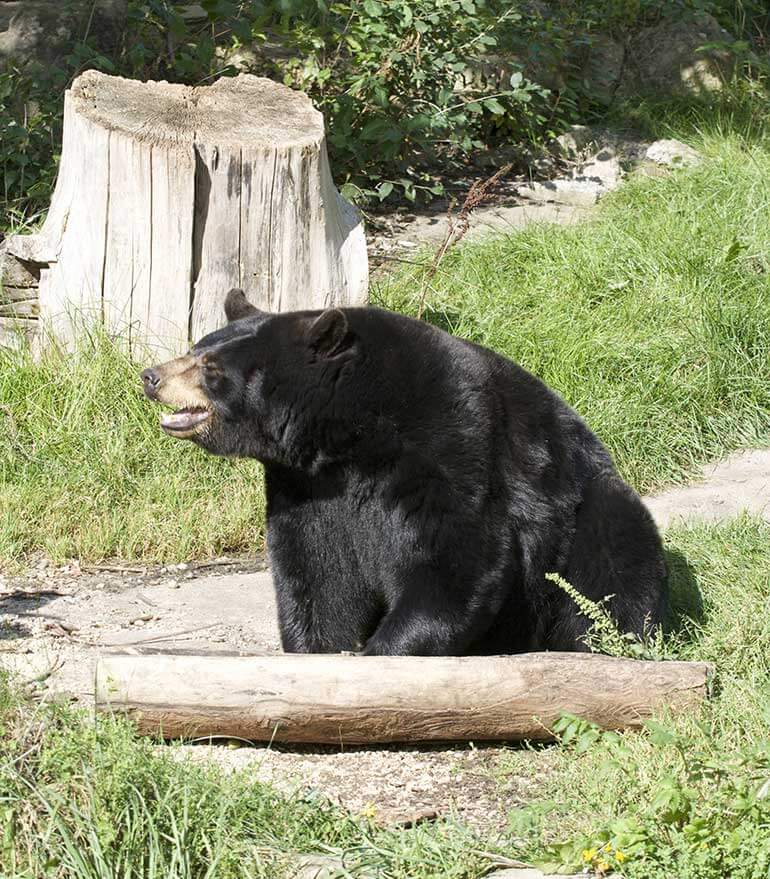 Finally, what if a bear is on the actual hiking trail? What do you do? This was a very real situation for a group of friends of mine while hiking a trail in Sequoia National Park. We had been hiking all day and were about 2 hours from the end of the trail. It was a pretty thickly forested area but the trail was well defined. Suddenly our lead hiker stopped cold in her tracks and instructed us to do the same. A cub had wandered onto the trail just up ahead. Quickly we scanned the area for the mother which wound up being just behind it. The two bears just stood there on the trail. We began speaking loudly calling out “Yo Bear” to make sure the bear knew we were there. They didn’t seem to pay much attention to us, but clearly our path was now blocked. We quickly discussed our options. One, we could head back the way we came, but the distance to the start of the trail was hours and hours away. We would never make it by nightfall. Two, we could simply give the bears their space and wait for them to move peacefully. We gathered together continually talking loud and just waited. Eventually, the bears simply walked off the path and into the forest. When they were a good distance away, we continued on the trail all the while keeping an eye on their position and behavior. Even though we wanted to get out of there as fast as we could, we did not run. This could invoke a killer instinct in the bear to chase us.

Rule #7: Never run from a bear (unless it is already chasing you).
Rule #8: Don’t walk up to a bear. Especially to take a picture. Give it it’s space!

As tempting as it is for the younger generation to capture every waking moment on camera, avoid that urge to take pictures of a bear. I can admit to doing this when a bear came down through our campsite once. I stood high up on the picnic table and snapped a couple pictures as it walked by. But when you see a bear in the wild, never walk up towards it to take a picture. This was probably one of the more crucial mistakes made by a group of hikers in West Milford, NJ. This article from ABC News shows the photographs taken from a couple of the hikers cell phone cameras. In all of them the bear is very close, but look at the last image. The hikers were approaching the bear who was behind the fallen tree. They broke rule #8. Unfortunately they also broke rule #7, but at this point there may have been nothing else they could do.

The full story was that a group of friends was out hiking (much like we were) and were approached by a couple hiking at a fast pace in the opposite direction. The couple was apparently worried and warned the group that they were being followed by a bear and should turn around. The group’s reaction was “Cool I want to see it”, which turned out to be an innocently grave mistake. When the group of friends first spotted the bear it was about 300 feet away. They walked closer to about 100 feet from the bear to take pictures with their cell phones. As the bear began to approach them the group turned to quickly walk away. They should have probably stood their ground and made themselves seem larger by raising their hands high over their heads. Instead they began to quicken their pace as did the bear.

Rule #9: Stand tall, stand your ground and attempt to make yourself look larger by raising your hands or a stick high in the air.

Witnesses said the bear didn’t seem aggressive but only curious. However the group started to run and so did the bear. When the bear came within 10 feet of the group, they all split up to run in different directions. The group later found each other but one of the hikers was missing. The missing boy was last seen climbing a rock telling the others to keep running. Police later found the bear circling the boy’s remains at the bottom of a ravine. At this point the bear was aggressive so the officers shot him. It’s a tragic story, and a good reminder that you can’t predict how an animal will behave in the wild. The only thing you can do is to take as many precautions as you can and follow the rules.