Whenever I’d ask people what’s on their travel bucket list, Niagara Falls seemed to be one of their top destinations. I had never been there and thought it was finally time to put it on my own bucket list. It was also time to see why Niagara Falls is regarded as one of the seven natural wonders of the world! I’ve seen many impressive waterfalls in my life, but there is definitely something very special about these falls that makes me understand why it’s earned such a highly regarded title.

To view the falls from the Canadian side drive to Ottowa, Canada.

Take photos from the Canadian side of the falls

The Canadian side of Niagara Falls will offer some magnificent photo opportunities.

Book a tour with Hornblower Niagara Cruises (Canadian side) or Maid of the Mist (USA side) to see the falls.

Take ride up to the Skylon Tower’s Observation Deck.

This is yet another way to get a birds eye view of Niagara Falls.

If you have kids and want fun…

Spend the rest of the day on Clifton Hill trying out some of the many kooky attractions.

If you want to do something more relaxing…

Drive to Niagara-on-the-Lake to explore Fort George, enjoy strolling through the charming village, visit great shops, and grab a bite for lunch, dinner or dessert.

I had heard there was a lot more to do on the Canadian side of Niagara so I decided to make this a day trip in my vacation to eastern Canada. To get to the falls you must drive or walk down a crazy street called Clifton Hill. Tourist attractions were lined up and down both sides of the street making it look like Universal CityWalk. However our primary reason for being here was to observe the natural wonders of the falls themselves.

Take The Boat Tour of The Falls

Every travel blog I had researched about Niagara made it clear that taking the boat tour of the falls was a NOT TO MISS activity. There were so many raving reviews on sites like TripAdvisor that I advised our group, “no matter the weather we MUST take this tour“. Fortunately it was a semi-warm day in early June and the sun was out.

That’s my mom and I above. On the boat tour you’ll be given a cute (and rather thin) plastic poncho to wear because with all that power from the falls, you’re guaranteed to get wet. Through my research I took the advice to wear flip flops so our shoes wouldn’t get wet. That turned out to be a great suggestion. I’d also recommend that if you don’t want to get too wet, bring with you a waterproof jacket to wear under your poncho.

In Niagara there are two boat tours. On the Canada side, the Hornblower Niagara Cruises will provide free red ponchos like the ones we are wearing. On the US side, the Maid of the Mist tour guides hand out blue ponchos. Both tours are pretty much identical. They take you along the American and Bridal Veil Falls then head for the center of Horseshoe Falls.

The Wettest Ride Of Your Life

When you first get close to the American Falls you totally feel a sense of awe. The falls are so powerful and spray up so much mist you’ll definitely begin to feel the water. At this point though you won’t get totally wet yet. I was able to use a camera to take some close up pics of the falls. The size is pretty impressive as you sail close to it’s base. There were tons of birds that might have been seagulls flying all around the area. As we passed along Bridal Veil Falls everyone was excited with anticipation for we were now headed directly to the mouth of the larger Horseshoe Falls. I put my camera away and held on tight to the boat’s railings.

Holy Cow! The closer we got to the falls the crazier the spray whipped around us. People were screaming like they were enjoying the rush of a roller coaster ride. This was some ride all right! It was hard to keep your eyes open with so much water flying around. My mom was able to see better because she was wearing sunglasses. The only expression I can think of to describe the experience was sheer awesomeness. I felt like Captain Jack Sparrow or Captain Barbossa aboard a pirate vessel caught in the middle of a white squall with gale winds blowing around us. It was an absolutely incredible rush. Fortunately the boat gets only so close to the falls so as not to get stuck in the powerful undercurrent. Then it can safely turn around and head back to the dock.

On the way back I noticed that Skylon Tower was perched high up on the Canadian side of the falls. This observation tower has a revolving restaurant offering fine dining at 775 feet above the falls. We didn’t have much time in Niagara or else we might have tried the Ride-to-the-Top elevator which transports you in 52 seconds up to the to indoor/outdoor observation decks. I’m sure the view is simply spectacular.

As we were taking in our final panoramic views of the falls, I thought about what it is that makes Niagara Falls so special. It isn’t the largest falls in the world. Niagara is second to Victoria Falls in South Africa. It isn’t even the highest. That honor belongs to Angel Falls in Venezuela. What makes it so beautiful I suppose is it’s combination of height and volume. Yeah that’s it, it’s the amount of water that goes over the falls. The power of the falls is absolutely tremendous. You can see how fast the water is flowing when you drive on the street or walk on the path just behind the falls. The river looks immense and its rushing so fast towards that horseshoe cliff. When you see the mist spray up over the height of the falls itself you can’t help but feel the power and magnificence of this natural phenomenon.

Niagara Falls has inspired many people throughout the last century. So much so that I can’t forget to mention all the people who felt compelled to plummet over the falls in a barrel. This has been going on from as early as 1901! I have no idea what would compel anyone in their right mind to try this (aside from attempted suicide) but if you read this wiki article you’d see that every few years someone attempts it. It’s amazing that anyone survived but surprisingly some have! I thought one story was pretty funny in a sick sort of way. In 1930, a man went over the falls in a barrel and brought with him his pet turtle Sonny. The barrel survived but became trapped at the base of the falls. The man suffocated and died, but the turtle (about 150 years old) survived! Ha! I’m surprised the poor turtle didn’t suffer a heart attack!

Clifton Hill And Niagara’s Other Attractions

Once you’ve had your fill of the natural wonders from Niagara Falls make your way back up Clifton Hill. Most people will either park somewhere on this street or at the top of the hill which is much cheaper. As we were walking back to the car, we couldn’t help but notice all the crazy attractions that lined both sides of the street. There’s a Movieland Wax Museum, Mystery Maze, Fun House, Haunted House and so much more. There were so many attractions that the street kind of reminded me of Pleasure Island from Disney’s cartoon Pinocchio. I felt if we stayed there too long we’d probably turn into donkeys and get sold off to work in the salt mines! Although we could have spent a lot more time to see the other attractions around Niagara Falls we decided to head out to another city known as Niagara-on-the-Lake.

Spend The Afternoon At Niagara-on-the-Lake

For kids, Clifton Hill is great but if you want to escape these noisy road-side attractions then travel a bit farther to the quaint town of Niagara-on-the-Lake. This village is so pretty with its beautiful blossoming flowers of every color that line the downtown streets. What’s amazing about this little town is that it was founded in the mid-19th century. Although it’s old and bustling with history, it’s amazingly well-preserved. Niagara-on-the-Lake is a short drive from Niagara Falls and it’s in the heart of Ontario’s wine region.

You can find parking pretty easily down Queen Street. You can also park at Fort George National Historic Site then take the free shuttle to the center of Queen Street. We would have liked to explore the fort but by the time we had arrived the fort was closed. In the center of Queen Street is the Memorial Clock Tower or Cenotaph. It was built as a memorial to the town residents who were killed in action during the First World War.

By reading this sign you can see just how old Niagara-on-the-Lake really is! But run-down it is not! The town has been meticulously cared for by it’s citizens. As you explore the neighborhoods, you can truly appreciate how incredibly pristine this quaint village is. 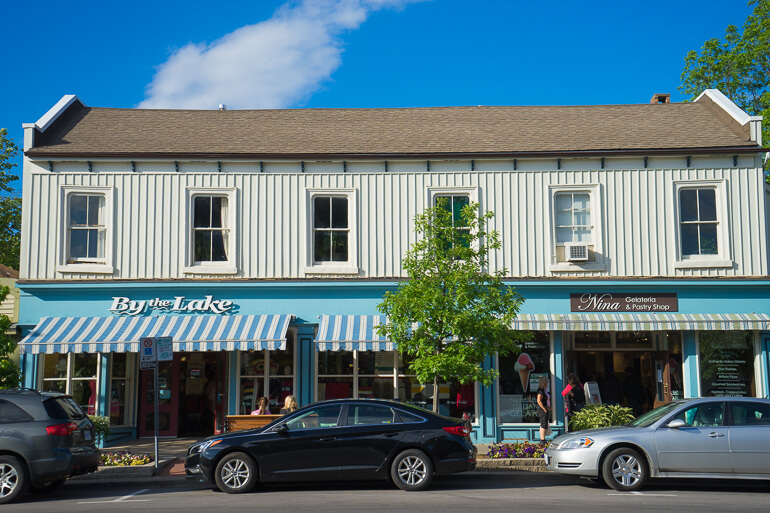 The town of Niagara-on-the-Lake certainly has a great selection of stores to browse through. You can find anything from fine-clothing to more traditional Canadian souvenirs to buy. You’ll also find lots of cafes, restaurants, and (my favorite) ice cream shops to satisfy all tastes.

At the intersection of King Street and Picton Street is the impressive Prince of Wales Hotel which was established in 1864. It’s an elegant Victorian building with red brick exterior and white painted wooden posts. Outside of the hotel was a horse-drawn carriage waiting to take passengers down the streets of this pretty little town.

I can’t get over how beautiful the flowers and landscaping were! There was so much color and the flowers all seemed to be in full bloom. People (including me) kept taking pictures of the magnificent blooms on display. It’s a great way to maybe plan for your own flower gardens at home!

Just across the street from the Prince of Wales Hotel is Simcoe Park. We must have been there at the perfect time because the trees were full of green leaves and the perfectly manicured grass was a bright green color. This park was so peaceful. There were really no people there when we visited making it that much more serene. It was absolutely gorgeous!

We drove down Queen Street towards Mississagua Street to see some of the incredible houses (that are probably mansions). Slightly past the Niagara-on-the-Lake Golf Club is a little parking lot. From here you could walk on a little path that leds to the edge of the Niagara River and connects with Lake Ontario. The lake is so huge it looks to me like the Pacific Ocean (minus the waves of course). Adjoining the golf course is the stone monument above that commemorates the battle of Fort George on May 27th, 1813. This monument was erected in 1923 and it still stands today. It’s amazing that a little town like Niagara-on-the-Lake can be so old and yet be so charming and have so much character. I’d highly suggest you visit this town for yourself.