If your touring through Eastern Canada definitely make it a point to visit Ottawa, Canada’s beautiful capital city. Ottawa is commonly described by locals as an environmentally friendly city that’s safe, quiet, and very clean. Although it’s not as big of a metropolis as Toronto or Montreal, Ottawa does share some of the same cultural advantages while managing to retain a small town feeling. I decided that by taking a bus tour of the city I could enjoy Ottawa’s charm and at the same time learn about it’s fascinating history.

Visit the Canadian Museum of History

Learn everything you can at the most visited museum in Canada.

Learn why the Canadian mounties are world famous.

The best place to grab a drink and dinner in Ottawa.

There is a great bus tour in many large cities that shuttle you around and let you off so you can see the top points of interest. In Ottawa, we took the Gray Line 1 Day Hop-On, Hop-Off Bus Tour. These big red double decker buses are not hard to miss. The way it works is if you buy a ticket at the Gray Line kiosk, you receive a wristband and can literally hop-on or off any of the stops on the tours list. We started by checking out Parliament Hill, the center of Ottawa’s downtown landscape. The gorgeous Gothic Revival style government buildings peacefully overlook the Ottawa River. You can take free tours of the buildings but must get tickets early enough to deal with security and lines. We didn’t have much time so just took pics and walked around the front of the Parliament building clock tower. The architecture is really impressive.

Brrr! Ottawa is definitely not the warmest city in Canada, but I’ve heard it’s also not the coldest either. I had seen images of people spread out on the lawn just in front of Parliament Hill (pictured above) looking pleasantly warm and enjoying the sun and the celebrations of Canada Day on July 1st. I must have caught the end of the cooler weather. It was pretty cold when I visited in early June. It was interesting how the overcast skies seemed to emphasize the unique character in the old buildings in town.

Next Stop, The Canadian Museum Of History

I’m a sucker for anything historical. I feel history adds that unique dimension to a place making them more interesting. So heading to the Canadian Museum of History was a no-brainer for me. After all it’s the most visited museum in Canada. This particular museum shares the story of the people of Canada both old and new. Inside you’ll find cultural attractions that teach about Canada’s history through works of art, priceless artifacts and interesting displays. 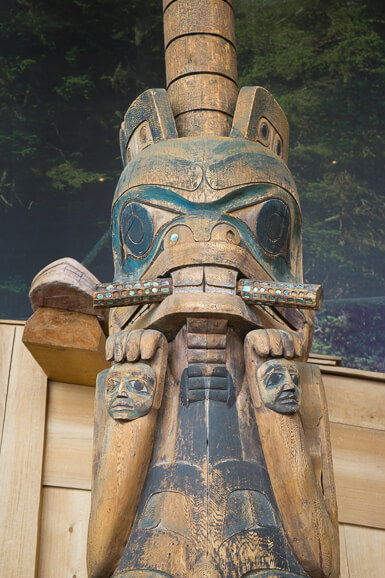 You really could spend a whole day in this museum. There was so much to see but we only had a short time so we tried to absorb as much information as possible. To the left of the ticket counter is the Grand Hall, home of the world’s largest and finest collection of totem poles. These monumental sculptures were carved by indigenous peoples of the Pacific Northwest coast of North America. If you look closely at the carvings you can see what looks like parts of people and animals. Totem poles usually represented stories about family legends, historical events, or elements of the cultural heritage of the native peoples who created them.

Adjacent to the Grand Hall is the First Peoples Hall. Inside we saw displays of Canada’s Aboriginal peoples including their early history, diversity and even their on-going contributions to society. They had a great display of the way they find archeological artifacts within the earth at dig sites. We also learned a little about Ottawa itself such as where it got its name. Ottawa comes from the Algonquin word “adawe” – meaning to trade. Makes sense since this city has always been an important business center. In fact that is why Queen Victoria of Britain chose Ottawa to be the capital of Canada back in 1857.

I’m not a big art person unless I see something totally cool like the big spider shown above on display in front of the National Gallery of Canada. Titled “Maman” by the sculptor Louise Bourgeois this bronze, stainless steel, and marble sculpture depicts a giant spider who is said to symbolize fertility and motherhood. If you get close enough you can see the sac of marble eggs located at its underbelly. It’s pretty awesome and reminds me of a character from a Tim Burton movie.

A Visit To The Royal Canadian Mounted Police Stables

Canadian mounties are world famous. The image of a Canadian officer with red jacket and wide brim hat sitting atop a black steed is iconic. I even remember a classic Bugs Bunny cartoon where Elmer Fudd is dressed up as a Canadian mountie in pursuit of Bugs (Fresh Hare – 1942). I knew at some point we would encounter a mountie somewhere in Canada but I had no idea that Ottawa was the home of the Royal Canadian Mounted Police Musical Ride Centre.

The Musical Ride is a world-renowned military pageant consisting of 32 horses and riders who perform intricate figures and drills choreographed to music. I’ve heard it’s a spectacular show to see if you’re lucky enough to be in town when they are performing. Being a rider in the RCMP is a very coveted position amongst the mounted police. There is so much competition that riders can only can serve in the pageant for a short time…I think like a year. I forget but they’ll share with you all this information on the free tour at the visitor center. We were shown pictures of the riders and their horses and learned a little of how the riders get chosen and how much training the horses must go through. It’s pretty intense. We also saw historical pictures of riders that performed for the Queen of England when she was very young. During the tour we entered the stables to see the well-bred tall horses. They are all black which has been a requirement since 1938. We also saw the arena they usually practice in during the day.

It’s really cool that the RCMP invites visitors to tour the stables year-round. If your lucky enough and your touring the stables and center when the riders are not away on tour you might get a chance to see them practice. We didn’t see the riders but did see some of the horses grazing outside of the stables in a gorgeously green field.

Byward Market is the perfect place to have a drink and get a little food for dinner. Even on the weekdays this little area is alive and buzzing with people. It’s crazy to think that the Byward Market has been in existence for almost 200 years but it has! If you stroll down the streets you’ll find plenty of cafes, pubs and restaurants. Actually some of the cities best restaurants are supposed to reside in this district. Unfortunately for us we picked a small restaurant that was pretty awful. What luck! Well you win some you loose some. I’d say do your research on Yelp and make sure the restaurant you pick has some good food reviews.

There were a few other things we saw while on the bus tour such as the historic residence of Rideau Hall. That is the official home and workplace of Canada’s Governor General. The homes in this area are beautiful and the landscaped grounds are set amid 79 acres! Another point of interest was the Rideau Canal a historic waterway lined with boats and beautiful trees. During the winter months this same canal becomes the world’s longest naturally frozen ice skating rink.

Unfortunately there are too many points of interest for only one day. A few of the locations we decided to skip were the Mill Street Brewery (I didn’t feel like drinking beer so early in the day), Dow’s Lake (We drove by it but didn’t feel we had the time to explore it), and Notre Dame Basilica (We actually visited quite a few Notre Dame churches on this trip in other cities so thought it’d be okay to skip this one.) We also drove past the Royal Canadian Mint which is open daily for tours. If I had more time I’d have also like to have visited the Canada Aviation and Space Museum, considered one of the best aviation museums in the world.

So you see! There is so much you can do and see in Ottawa. Sometimes it’s better to take a little extra time so you can enjoy and really let it all sink in rather than try (like I did) to get it all in one day. Either way you’ll come out of the experience knowing a lot more about this great Canadian city.