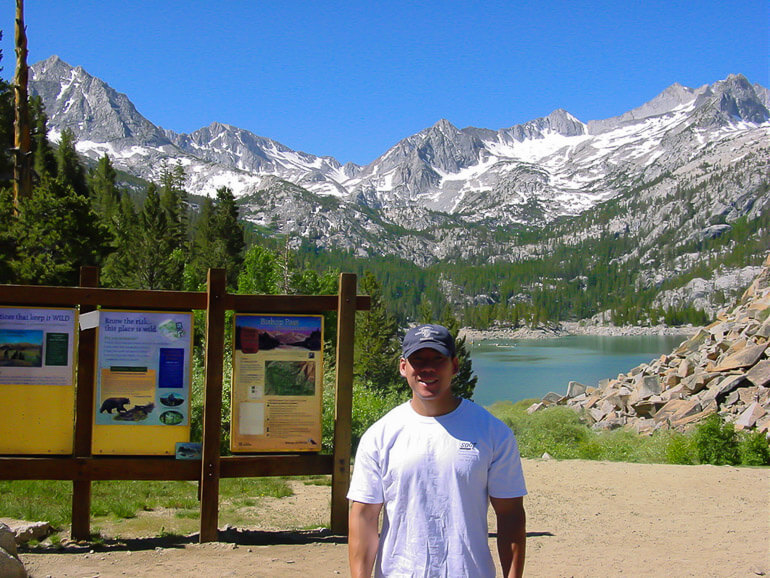 Are you familiar with the Sierra Nevada mountain range? If you’ve visited Yosemite National Park, Kings Canyon, or Sequoia National Park in California, then you should be. Those giant granite mountains you hiked through are a part of the sierras which extend north-to-south about 400 miles and about 70 miles east-to-west. Pretty big, huh? Most people don’t realize they’re in the western part of the sierras when they visit the national parks I just mentioned. Did you know that the eastern sierras may be lesser known but are equally as beautiful as the west? I had no idea either until I was invited to backpack through the eastern sierras via the Treasure Lakes Trail. What resulted was an incredible trip through pristine lakes and beautiful mountain scenery that looked like photos from an outdoors nature calendar. 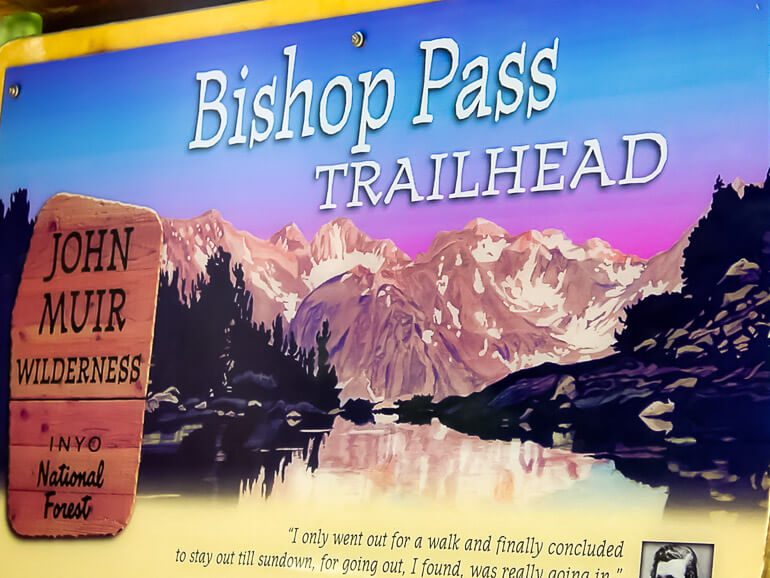 I had done the drive to Mammoth Mountain along highway 395 many times and had always looked at the mountains to the left side of the road in awe. The mountain peaks were huge but I had never once journeyed towards them until today. From the town of Bishop, we headed west on Highway 168 for about 15 miles until we reached South Lake Road. We traveled another 7.1 miles to the end of the road to find the trailhead marked by the sign above. We would start the hike at the Bishop Pass Trailhead and eventually split off to the less visited Treasure Lakes. I read the quote from John Muir shown on the trailhead sign “I only went out for a walk and finally concluded to stay out till sundown, for going out, I found, was really going in.” Yep, that’s what we were about to do…go into this unknown wilderness.

This was going to be the first backpacking overnight trip I had ever done. I was glad that there were eight of us simply for the fact that there is safety in numbers. After all, there are bears in this area and I didn’t really want to surprise one during the hike. Bears usually shy away from larger groups of people…thank god. Only one of my hiking companions had been here before and so he led the way to where we would camp for the night. 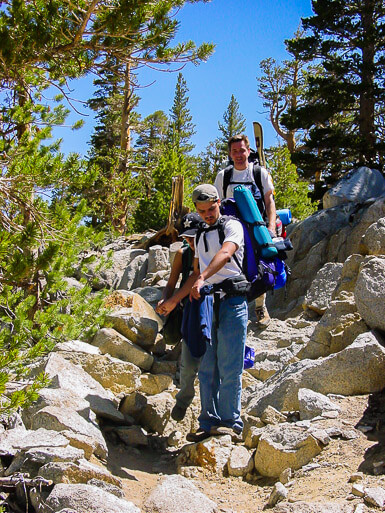 With our packs strapped to our backs, we headed south along the eastern side of the lake gaining elevation rather quickly. Then we lost site of the lake as we climbed up some steep and rocky switchbacks. We had now entered the John Muir Wilderness and the next part of the trail would be long and straight through the forest. At the Treasure Lakes Trail Junction we took the trail to the right marked Treasure Lakes. You lose some elevation when the path winds around the back of the lake, but eventually gain it again. As the trail ascends you finally reach a point where you climb out of the woods and onto open ground. The views from here of South Lake are simply spectacular. You can even see South Lake Island pretty clearly from up here. I realized excitedly that this was only the first of many lakes we would get to enjoy on this hike.

What did I tell you about the beauty of these lakes? You can just feel the peaceful serenity in that picture above. We stopped here to eat, rest and try to soak in the magnificent scenery. And there was nobody else around! Unlike the trails in the western sierras that become plagued with travelers during the busy summer months, this one we could selfishly enjoy all to ourselves. 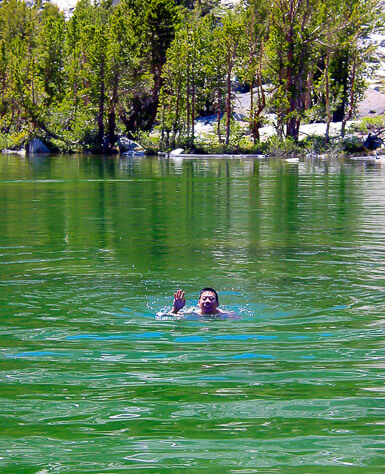 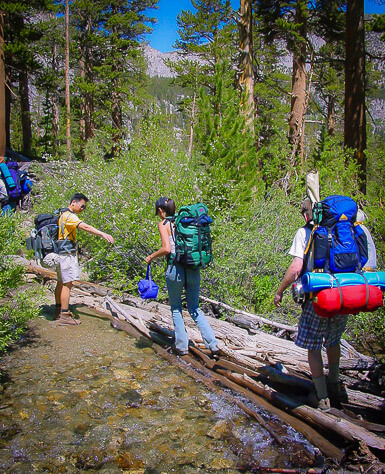 Enough staring at the lake, it was time to test our metal by daring each other to jump in. Four of us, including myself, took the challenge. OMG!! ITS FREEZING!!! Yep, unless your used to glacial water temperatures you would have shrieked the same thing once you plunged into the lake. It was refreshing though and was exciting just the same. My friend Steven, being the most adventurous, swam further out towards the middle of the lake. He swam back pretty quick to get out though! The other four on the hike got their fare share of water. The trail crosses several creeks so we found natural logs that had been positioned to cross over these babbling brooks.

I can’t get over the exquisite Eastern Sierra scenery. Every lake we approached or every one we passed offered more incredible views that were simply stunning. 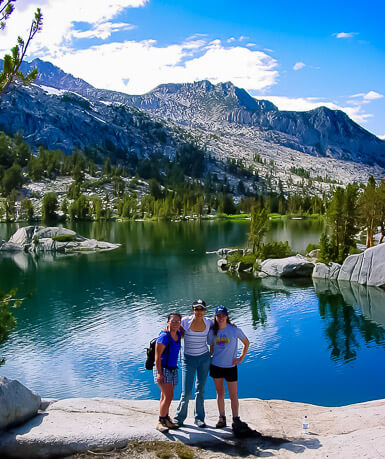 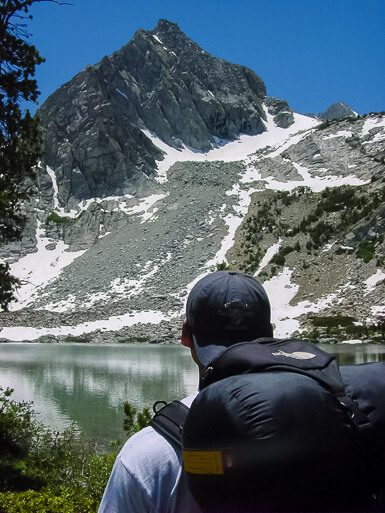 We had reached the first two Treasure Lakes at an elevation of around 10,600 feet. The granite basin provides a way to circle the lakes shores and view different vantage points. The impressive talus slopes of Mount Thompson, Mount Goode and Hurd Peak taunted us to explore even further. So we did.

For fun, we climbed up higher into the snowcapped mountain terrain. There aren’t too many times when you can have a snowball fight in July, so we seized the opportunity to toss a few at each other. Bombs away!

I felt like I could explore forever, but it was time to return to the lake and campsite we had picked out for the night. In the backcountry, you don’t have designated campsites, so you have to do the best you can to find one as comfortable as possible. We ate our dinners, put the remainder of our food in bear-proof canisters then gathered to enjoy the last few hours of daylight together. As the sun fleeted, the mosquitos engulfed us! It’s a good idea any time you are around water to bring bug repellant. Otherwise you’ll be hating life in the morning. Temperatures dropped significantly at night and so we bundled up in our jackets and retreated to our tents. It was only going to be one night and we’d be returning the way we came via the Treasure Lakes Trail. I looked forward to the return journey and the sights and sounds of the Eastern Sierra Nevada, a place I feel everyone should get a chance to see for themselves!