Would I like to try riding dirt bikes and ATV’s in the desert? Hell yeah! Sounds like an awesome way to celebrate someone’s birthday. We gathered some friends, headed out to a place called Jawbone Canyon and rented vehicles for the day. Things were going great, that is, until we got stuck on top of a super steep dirt hill. Keep reading to find out how we made it down and how you too can enjoy a day of safe ATV riding.

Finding A Place To Ride

If you live close to a desert like I do, there are lots of options for locations that rent out ATV vehicles. I actually prefer the desert as a riding destination because there are lots of open spaces and it’s easier to navigate without trees overhead. If you live back east, there are many forest areas that look like they would be fun to explore also.

I had no idea that Jawbone Canyon even existed. It’s right off of Highway 14 that runs north/south in Cantil, CA. I’ve passed this location numerous times on the way to the Mammoth Mountain ski resort and never even saw it. When our van pulled up early Saturday morning we jumped out and began to look around. I guess I thought this was only a gas station but nope, it’s a hub for desert recreational vehicles. There is a little food stop and gift shop, bathrooms and parking area where people prep their vehicles. It was pretty cool to see all the families that had all sorts of vehicles for their kids and spouses to ride.

We headed over to the rental office to make our payments and get ready to ride. The onsite rental company is called Fun Time ATV Rentals. I think we paid about $150/person for 4 hours. Most people rented a 300-400 Honda ATV, and a couple of the guys in the group rented dirt bikes. Brave souls! After paying and signing our life away on the release forms, we were told to pick out helmets, goggles and gloves. The dirt bike riders also grabbed a pair of kneepads. We geared up and headed outside to pick out our bikes. 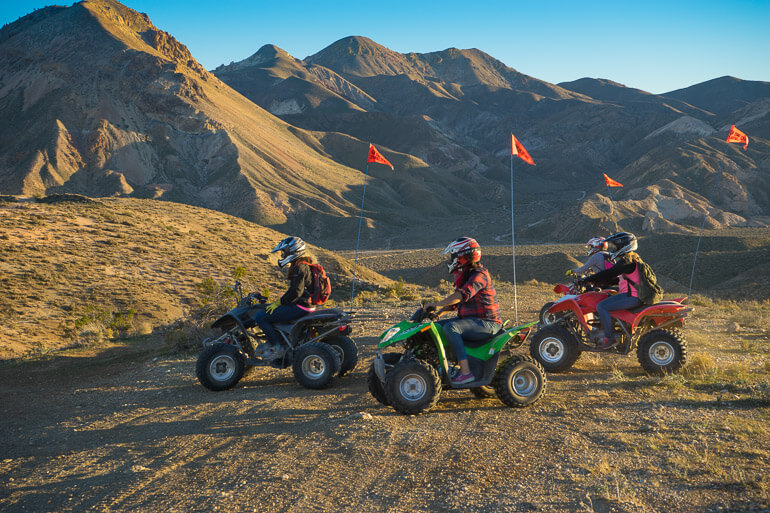 Learning How To Ride

If you’ve never ridden an ATV (All Terrain Vehicle) before, have no fear. You can literally learn in a day. One of the Fun Time ATV employees gathered us around a bike and began to explain how to operate them. It sounded confusing at first, but slowly started to sink in. First there was turning the vehicle on, the kill switch, and of course getting it into first gear. These vehicles are like stick shifts in that you have to use your feet to shift up and down. There were plenty of us who felt confused and had never done it before. The instructor made us feel comfortable that we can ask questions and practice the techniques before we took off too far. After shifting with your feet you use the handlebars to increase your speed. After a few minutes everyone had gotten the hang of taking off.

Time To Hit The Trail

Now there was no stopping us. We knew the basics and headed out together towards the unknown canyon. It was actually lots of fun to rev the ATV up and gain speed. Soon the trail we were following split in two directions. One was uphill, the other was straight under a huge water pipe. Obviously the straight path would have been easier (and probably safer) but how can you keep adventurous kids from trying to go up the hill? One by one, each bike attempted to travel up the steep hill. My friend hesitantly decided to try it too. Only problem is she panicked and started heading for the edge of the short cliff. She was okay but we learned that if you’re starting to loose control, LET GO OF THE HANDLEBAR! In other words don’t continue to give it gas to accelerate. I’ve seen people do this on motorcycles too! Fortunately a friend with more experience helped her get down to the flat trail.

It was fun to follow each other single file on the trail that lead deep into the canyon. Sometimes the slower vehicles would get a little behind but it was easy to find the rest of your party simply by looking at where the dirt clouds were kicking up ahead. Also each ATV had a long bendable plastic pole and bright red flag at the top. This made it super easy to find other vehicles over hills. Speaking of hills, we started to get pretty confident at handling the vehicles and started taking more interesting routes. At one point it led us up to a beautiful outlook over the desert valley. The sun cast shadows across the vast terrain making the desert landscape look beautiful.

We rode for a long time till we hit the end of the canyon. The trail turned and headed north so we followed it. It whipped around a hill that snaked up to the top. A few people in the group were not comfortable with trying the hill so they stayed behind. The rest of us rode it to the top and a bit further. The views were amazing! No one wanted to go back the way we came so we continued on but got stopped by a super steep trail that lead down the hill. A few of the more experienced (or simply crazy) riders went down the hill. The rest of us including myself felt it was just too damn steep so we went back the way we came. Now our group was separated in two. We continued around the base to see if we could spot the rest of our party and soon enough there they were…at the top of the hill debating how they were going to get down safely. The picture here does not at all do this hill justice. It was REALLY steep and the ground was broken up pretty bad. It looks like a tire could easily slip in the gutted out dirt and send the ATV falling down the hill.

Yeah…this looked REALLY sketchy! Fortunately one of the guys in the group took control of each ATV and slowly navigated down that steep path. It was funny to see everyone below gasping and watching nervously as he rode each vehicle down. AMAZING! He did it! I bet he sweated alot though but he had nerves of steel. Now we were all safely down and ready to continue exploring.

Take Time To Rest And Enjoy The Scenery

It’s a great idea to pack a little snack, food or drink for yourself so you can take a break from the dirt and heat and fuel your body. We did just that and it was great to swap stories of our recent adventure. Now it was time to head back. It took quite awhile to return and the sun disappeared while we were still on the trail. Fortunately each bike had a bright headlight so you can see where your going. It was still kind of scary because there are so many random dips and arroyos in the desert. It’s actually pretty dangerous at night so I was happy when we finally made it back to the rental office. OMG when I got off the bike my muscles were so sore! I guess that’s what 4 hours of desert riding will do to the untrained body. It was a super fun adventure and I highly recommend you try it sometime too!

If you want to ride in Jawbone Canyon here is the address: