So you’re telling me there is a bridge that we will be hiking to it but it goes nowhere? Let me think…ok sure. Looks like I just got talked into hiking “The Bridge To Nowhere”. There’s just one thing. If it goes nowhere, why even bother hiking to it? A friend of mine was really excited about this adventure. A coworker had done it the previous week and was sharing great stories of how much fun the hike was. I consider myself an adventurous person so I took the bait, called a few friends and asked them to join me Saturday for a nice hike through the San Gabriel Mountains. It was quite and adventure to say the least and we saw more than we bargained for. 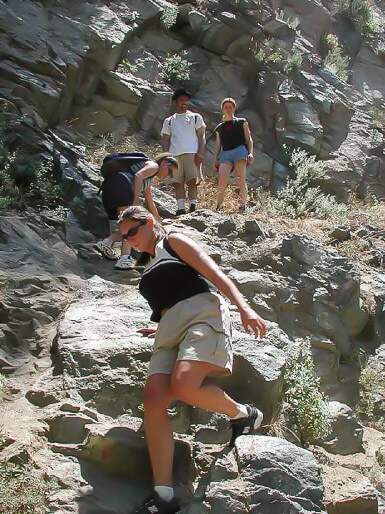 Where did the trail go?

”Try not to get lost okay”? That was the advice we received going into this hike. Should I be worried? We pulled up to the parking area at the end of East Fork Road and paid the $5 fee for a wilderness permit. The trail started off as a service road for about 1/2 mile until we reached Heaton Flat Campground. Well, there weren’t any campers today. Hell there weren’t even any hikers. Maybe because it was mid summer and the temperature outside was pretty high so most logical people probably decided to stay home. Not us. We were committed to finding this bridge come hell or high water.

The service road turned into a trail that was easy to see and sometimes wasn’t so easy. Like when the trail would cut up into the side of the mountain. OMG did we already get lost? I usually never get lost on trails and this was a pretty popular Southern California hike. It seemed as though we were hiking for a long time but no bridge. Oh wait…that can’t be it right?

It’s a bridge all right but I think it goes somewhere. This isn’t our “nowhere” bridge. We crossed it and seemed to be heading in the right direction but I still had this weird feeling that we were lost. Thank god I traveled with company and we brought food. Sometimes all you need is a good peanut butter sandwich or some beef jerky to give you the stamina to continue to find your destination.

Cooling Off In A Cold Stream

Ah, now this is much better. I love summer hikes that travel through cool rivers and streams. The water looked really clear but I wouldn’t drink from it unless I had some kind of purification system. It felt great though to wet our arms and legs after hiking in the hot sun for some time. Now I don’t remember if the trail led right through this stream but here we were. Actually since the trail at this point follows the East Fork of the San Gabriel River, it made sense that we would have some river crossings. Thank god! I was feeling much more confident in our navigational abilities now.

We weren’t the only one crossing the river today. It’s definitely not a rattlesnake but I don’t know what it is so I didn’t get that close to it. My friend Ron bravely stepped forward to snap this picture. Should I have been worried that this water snake was coiled? Let’s continue up the trail shall we?

Learning to love a wilderness area

Some people might look out at the horizon and see nothing but rocks, brush, and treacherous mountains. When you’ve been hiking for several hours and you’re getting a bit banged up from the trail you might start thinking like this too. I thought we should take some breaks so we could look around us and see just what we were hiking through. This is the actual wilderness, a place that seems so mythical to most residents of Los Angeles. It’s the Sheep Mountain Wilderness to be exact and there’s over 44,000 acres of it. We just saw a snake so where are the mountain sheep this area is named after? I’ve heard bighorn sheep are difficult to spot although they are common in this area. We all decided to keep a look out for them. 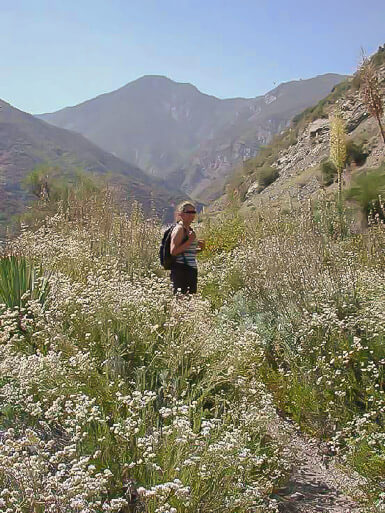 You know what’s even cooler about the East Fork River? GOLD! Yep…this area was full of it! In fact, there are still gold mines in this area that were used from the 1850’s until the early 1900’s. If you find one, you should think twice about entering it unless you really know what you are doing. I’ve heard that lots of people have died trying to access deep parts of the Southern California mines because when you are that deep, oxygen levels are around 4%…not nearly enough for a human to breathe. Oh, and a mine could collapse at any given moment. Have I scared you yet? Good…i’m just trying to keep the gold all to myself. HA!

So right about now we were getting a bit nervous. We had been on the road for a good amount of hours, much more than we had anticipated for this hike. That’s why I feel we got lost but somehow found our way back on the trail. The one thing bad about wearing shorts on a hike like this is that there is so much low brush that as you walk by you’re guaranteed to scrape your legs up. This is when those convertible pant shorts come in handy but I didn’t have any back then so I had to live with the bloody legs. It wasn’t terribly bad, just a little annoying especially for the newbie hikers in our group. 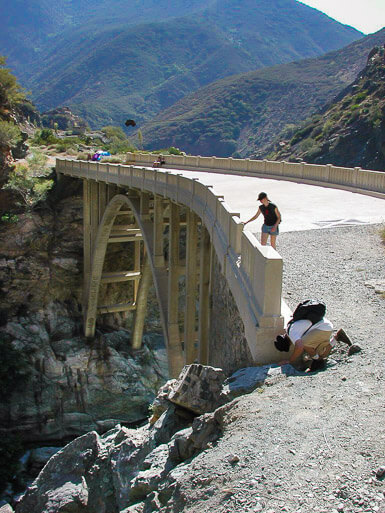 Alas we find the bridge!

Well I’ll be darned! This is the famous Bridge To Nowhere. We had finally made it. Now in the picture, the end of the bridge on the far left is where we came from. My friend who is a civil engineer (so I’m sure he just loves bridges, right?) is inspecting the end that goes nowhere. What you can’t see is that the bridge ends right at the edge of a tall mountain. How the heck did this happen? All right so here’s the story.

Back in the 1930’s builders wanted to push a road through the East Fork. At the Narrows they built an arched concrete bridge that would be part of a future route to connect the San Gabriel Valley and the desert near Wrightwood. Of course something went terribly wrong. In 1938 there was a flood in Los Angeles that became one of the most catastrophic natural disasters in Southern California history. Lives were lost, buildings were damaged, and our poor little bridge was stranded because the road that led to it was destroyed.

So now the bridge is a hikers destination. When we arrived there were a few other people that had just finished bungee jumping off the bridge. Apparently the Bridge To Nowhere is a popular location for people who want to try bungee jumping. No thanks…especially not over a rocky floor base. If I’m going to do it there better be a lot more water down there. 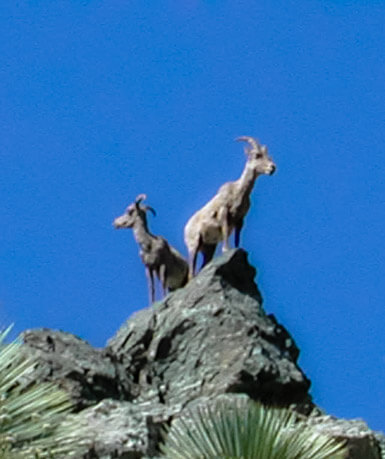 While we were inspecting the bridge a rock suddenly fell down the side of the mountain. Then another and another. We all starred at the rocks then followed them up to where they fell from. It took a few minutes for us to recognize that right in front of our noses where these two Nelson bighorn sheep. They were standing right at the edge of an outcrop looking over at us. Had they been there this whole time and we didn’t even see them? They blended in really well with their surroundings but geez they were right there! I know the picture looks like those fake bigfoot photos where nothing is clear. But I swear that is the picture my friend Ron took of the sheep. Our cameras weren’t as good back then and maybe he was a little nervous that if he made too much movement or noise they would disappear. It was a really cool sighting and nothing I would have expected to see so close to Los Angeles.

Although the bridge went nowhere, we definitely wen’t somewhere really cool. River crossings, snakes, sketchy trail directions, a bridge and bighorn sheep. I told you we got more than we bargained for! I think I’m going to tell my coworkers how cool this hike is too. And I’ll probably warn them not to get lost.