Some people think if you’ve seen one waterfall, you’ve seen them all. Well I beg to differ. If you’ve had the pleasure of witnessing the majesty of Yosemite Falls in Yosemite National Park, then you know what I’m talking about. At 2,425 feet in elevation, Yosemite Falls is the tallest waterfall in North America. And it is awesome! The power of the falls can be felt from the trail at the base where most people can take gorgeous pictures. However, if your feeling adventurous, you can hike to the very top of the falls! That’s what we did on a couple of occasions, once when the waterfall was flowing strong and another time when the waterfall was bone dry. I’ll describe both of those experiences for you and show you some pointers so you can reach the top too! 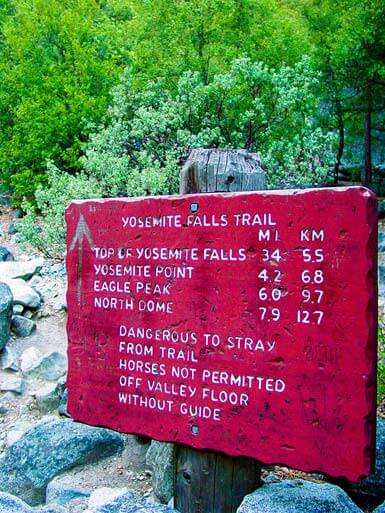 This all depends on what you want to do. If you want to see the rip-roaring fullness of the waterfall while it’s at it’s peak, go during the spring. The hike is stunning not only because of the falls and raging river at the top, but the incredible greens you’ll see in the trees and plant life on the way up. However, for a truly unique experience you may want to go towards the end of summer or early fall when the waterfall is totally dry. Why would you want to do that? Well I thought the same thing until I reached the top and saw all the really cool dry pool beds. This is the only time you can actually hike inside the ghost river and walk around it. Hell, you can even get right up close to the edge and take a picture of your feet hanging over the empty falls. Just be careful! I’ve done both and it was equally awesome both times.

The trail begins near Camp 4, along the Valley Loop Trail. You’ll connect with the Yosemite Falls Trail, one of Yosemite’s oldest historic trails built between 1873 and 1877. Get ready for a day of switchbacks! Almost immediately, you begin to gain elevation via a series of switchbacks that take you through a wooded forest. The first major landmark is Columbia Rock, which is only about a mile from the start of the trail. The views from this point are spectacular. You should be able to get a bird’s eye view of Yosemite Valley, and clear views of Half Dome and Sentinal Rock.

You can turn back if you’re tired…OR…you can keep going. I’m glad you decided to keep going, because it’s only another 0.5 miles to get to an unbelievable view of Upper Yosemite Fall. If you need proof, just look at that picture below. Stunning! The cool thing is that if the waterfall is at it’s peak flow, you might feel some mist from the falls. You’ll definitely appreciate this especially if it’s a hot day.

Have I already mentioned how amazing the views are? Sorry, but I really can’t stress it enough. And the rock is so interesting. Dark grey granite coated with light yellow moss seems to make shapes that can spark your imagination. Doesn’t this image look like a man with deep-set eyes, a straight brow and a prominent nose is peering out over the Yosemite Valley below? It also kind of looks like one of the Muppets, Sam the Eagle. You see? Your imagination can run wild with all the shapes and textures of the rocks.

Now you’ll continue up the trail. It gets pretty steep and very rocky. More switchbacks too! But the hard work will soon pay off when you reach the top. You may find people resting along the river right about the location where the falls head straight for the edge and pour gracefully downward. It’s pretty nice because the rocks are warm and the mist can be cool. Not only that but you’ll probably be exhausted at this point. It’s the perfect location to recuperate from your long hike, eat, or even take a quick nap!

Well you made it to the top of the falls! When I was here in late summer, it was so different in that there was not a drop of water in the creek and nothing going over the falls. Crazy right? I mean you could literally walk in the mouth of the waterfall and peer over it. Well as close as you could safely do it. Ok, that was pretty fun, but guess what? That’s not all there is. If you’ve got a little extra juice left, you can continue your hike and head out for Yosemite Point another 3/4 of a mile east. Come on, I promise the views will be even more magnificent! Great…head back north on the Yosemite Falls Trail till it meets with the Snow Creek Trail. There will be a large wooden bridge that crosses over Yosemite Creek. Can you see me on the bridge below?

Once you cross the bridge, some people head off to explore the Creek, which in this picture looks a lot more like a full river. This is the body of water that feeds Yosemite Falls. The forest is truly beautiful and wild. The water is incredibly clear. You might want to explore to see if you can see any fish. But don’t get too distracted. Hop back on that Snow Trail and continue east.

The remainder of this trail is mainly crossing over large granite plateaus with a few small trees scattered around. Continue on and you will eventually reach Yosemite Point. From here you get some of the most incredible views in the park. You can clearly see Half Dome in the background.

And here we are atop Yosemite Point! It is really a breathtaking experience and view. Sometimes I don’t think photographs can even do it justice. The view is 360 degrees of sheer awesomeness! You can tell it was spring because there is still a good bit of snow on top and around Half Dome.

I forgot to mention there was plenty of snow on the trail on the way up when we went in the spring. Not everywhere, but just in the higher elevation. Here is my friend Katie ready to walk down through the snow. She has some high hiking boots and the trail was already sort of dug out for hikers as you can see so it wasn’t much of a problem. Plus it was a nice hot day. We might have had a snowball fight or two. How could we resist it with so much snow tempting us. The remainder of the hike down was just as nice as it was on the way up.

I did notice that many of the thick trees had a bright green almost glowing moss growing on one side. Don’t they say that moss only grows on the north side of trees in the Northern Hemisphere? Well I couldn’t really tell but it looked like there was a ton of it. I was able to get a closer look at it since there were big chunks that had fallen of some trees and were just lying around. Wow! Take a look at the close-up shot! It wasn’t squishy and wet like I had expected but instead was rather woody and tough. I had never seen moss so bright fluorescent like this. Almost looked like something I’ve seen in The Grinch Who Stole Christmas cartoon. The wilderness never ceases to amaze me.

Well that concluded our trip. I hope you get the chance to try this hike out when you visit Yosemite National Park. You can always do one of the lower checkpoints if you get too tired, but anywhere you go, you will get to enjoy the beauty of this American wilderness!