When a friend recommended I should take a trip to Death Valley National Park, I was like eh…ok sure. Not really enthused and with low expectations, my crew of adventurers and I traveled to what I thought would be a barren and desolate location for the weekend. Instead I was amazed at how alive and colorful the desert can be. There is so much scenic landscape to explore, so many trails to hike, so much history to learn and an unending amount of photographic opportunities.

It really blew my mind and made me regret not staying a few more days. However, on our two day visit, we were able to cover so many points of interest that I decided to break this story up into two parts. The first post will include exploring the ever-changing geography, learning some interesting history, and a night of successful stargazing. The next post will cover hiking through slot canyons, exploring red and golden colored badlands, and searching for wildlife amongst the immense and fine-powdered sand dunes.

We begin our desert adventure at the lowest point in North America, Badwater Basin which sits 282 feet below sea level. To help guests get a sense for how low this really is, there is a green sign that says “SEA LEVEL” nestled into the mountain cliff 282 feet above the Badwater Basin parking lot. I think it was only by chance that someone glanced up and saw the sign because it’s pretty tiny compared to the neighboring mountains around it.

When we first arrived I was surprised to see a few shallow pools of water. Death Valley averages less than 2 inches of precipitation per year, so it seemed that the likelihood of finding water would be almost none. But there it was! Apparently these small spring-fed pools contain so much of the accumulated salts from the surrounding basin that it makes the water undrinkable. Hence the name “bad water”. That discovery was a first for me in this land of extremes. Can you imagine…finding water in a desert, but you can’t drink it! That’s pretty harsh! The pools are the home of the Badwater snail and a few other aquatic insects. Now I really wouldn’t want to drink that water.

Badwater Basin’s terrain looked so weird. For as far as you can see, a light brown dried up crust of dirt carpets the floor. Right down the middle of it is a trail made of white salt that looks like snow. It was so slippery kids were running down it and sliding on the flats of their tennis shoes. We only walked part of the way down the trail, but if you continue walking out you will see these hexagonal honeycomb shapes that are made out of thin crusts of salt.

If you visit Death Valley, be prepared to do A LOT of driving! From Los Angeles (depending where you live) it is a 4-5 hour drive. You take the 15 north till you hit Baker, the small town with the world’s tallest thermometer. Then you head north on the 127, then east on the 190. There is a pay station on the side of the road where you can buy a national park permit. We skipped it the first day but wound up buying one on day two. I don’t think they are very strict on giving tickets to those who don’t have them, but I don’t mind supporting the National Park Service anyhow.

Also make sure you fill up on gas often! Sometimes the stretch of road between one attraction and the next could be 75 miles or more without any source of gas or food in between. We learned this the hard way and realized instead of chancing running out of gas in the most notoriously dangerous desert in the US, it was better to loose 40 minutes to drive back to the gas station and fill up. As they say, better be safe than sorry.

I must admit, I was not a happy camper on the first day of our trip. We left much later than I wanted and the result was that we arrived at the park pretty late. This resulted in us trying to chase down the day’s last bits of sunlight. You can see the fading sun in the photo above. We drove down the one-way 9 mile winding Artist Drive, through the multi-hued colored hills. My first bit of advice for this trip is to make every second of daylight count. Unless your stargazing, the sun is your most important asset. It casts such an incredible display of light across the mountains that at different times of the day, the hills may appear deep red as if they are on fire or illuminate bright yellow as if they are shimmering with gold.

The view of the hills on Artist Drive is incredible. The sun only makes things better as it brings out the vast colors in the rocks known as Artist’s Palette. If you look closely you can see red, pink, yellow, bright green and a soft purple scattered among the rocks.

I should introduce you to the welcoming place we spent our one night in Death Valley. It’s called Furnace Creek Ranch (not to be confused with the more expensive Furnace Creek Inn up the road). The Ranch was absolutely wonderful as far as I was concerned. Everyone was extremely kind and accommodating while we were there. It was a busy weekend in January, one of the best times of the year to visit the desert. Early winter is ideal due to the tolerable temperatures. In late spring and summer, the heat is unbearable making the park much more dangerous to explore. The Ranch has a convenient general store with lots of cool items, gifts, books and food. We stocked up here on food and water before setting out for our second day of exploring. There are also a few eating places located next to the general store. The food is nothing to write home about, but it did the job of filling our bellies. They also have a swimming pool, golf course and horse stables. I would have loved to have gone on a horseback ride, but maybe next time.

Behind the hotel’s registration building is The Borax Museum. We wandered in to check it out and wound up learning some interesting history. The museum is housed in a small single room but it is packed with information. The walls contain artifacts from the miners and laborers who extracted borax crystals from the valley floor. What exactly is borax? Without getting too technical just know that borax is a valuable mineral source that has many uses such as in detergents, cosmetics, and fire-retardants. It was not the first thing mined in Death Valley but was sure one of the most successful. Actually prospectors first made their way to Death Valley with hopes of gold and silver ore. Some were successful and the building of boom towns began like the town of Rhyolite. But by the early twentieth century those towns dried up leaving behind broken down shacks and ghosts of long ago.

The museum also houses an incredible display of minerals collected from within Death Valley. Each geological rock is labeled by name and the exact location in the park from which it came. Each mineral is so different in color and composition from the rest. It would be fun to have a a geological scavenger hunt to find all the minerals displayed in this museum.

The museum explained the history on the famous twenty mule teams I kept hearing about. As borax mining increased, miners needed a way to haul the mineral from the remote and mostly inaccessible mines in Death Valley to the railroad at Mojave. They began by using mules in teams of 8 and 10. This wasn’t enough so they put together teams of 20 mules that stretched over 100 feet from the wagons. These dependable teams moved more than twelve million pounds of borax. The image above is the barn that housed the mules at Furnace Creek.

When you walk out the back door of the Borax Museum, you walk right into a time capsule of historical machines and artifacts from the early days of Death Valley. Above is the Baldwin 280 Locomotive that hauled borate ore from the mines. You’ll notice a little wooden number fixed to the wooden post. Each item in the outdoor museum is described in detail on a paper handout given for free inside the Borax Museum. It might look like old rusty junk, but just think how each item was part of many peoples daily lives. If only those items could tell stories from those long days past. 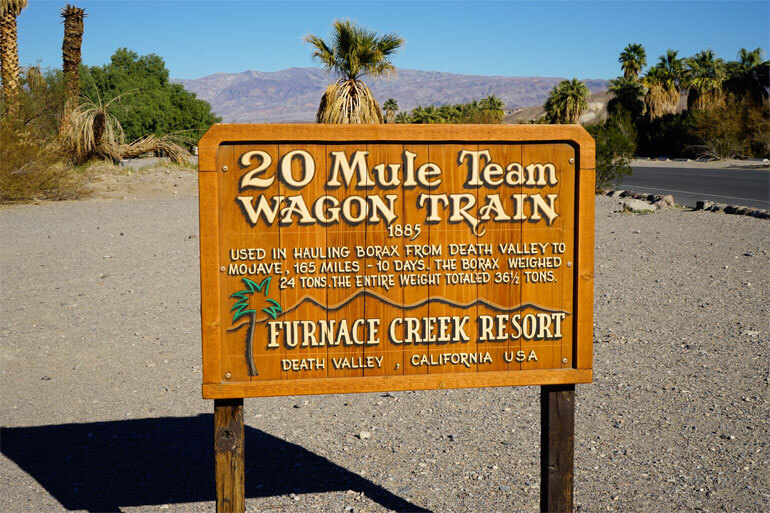 In front of Furnace Creek Ranch, is a real carriage that was pulled by the twenty mule teams. A wooden sign stands next to it with more information on it’s history. The carriage is actually quite large!

We had quite a bit of fun the first day (regardless of our short amount of time) and as the sun began to set, we prepared for the next event. Stargazing! Death Valley is one of the best places in the United States to watch the stars. It is especially dark on nights of the new moon (when the moon is not visible). If you have a telescope, bring it! You won’t find a better location to get closeup views of the planets and constellations. We did not have a telescope unfortunately, but we did have our cameras. My brother taught me a few things about taking pictures of the night sky. I need lots of practice, but it was very exciting to see the constantly changing positions of the stars.

Death Valley acts as the location for a few star parties every month. (No…not a party for celebrities!) I’m talking about a night were groups of astronomical enthusiasts point their telescopes towards the stars and planets. Bystanders are welcomed and encouraged to look through the lenses to witness the stellar beauties in the sky. After my first experience with astronomy, I think I might just come back for more!

Find out what happened on day two of our Death Valley two-part adventure! Read “Exploring The Dunes And Canyons Of Death Valley.”